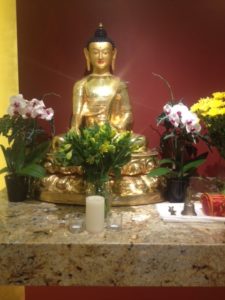 Abhidharma (Tib. chö mgön pa) The Buddhist teachings are often divided into the Tripitaka: the Sutras (teachings of the Buddha), the Vinaya (teachings on conduct or moral ethic), and the Abhidharma which is an extensive analysis of phenomena. With respect to mental states and factors, the Abhidharma, for example, lists the 100 states of the mind and classifies them into wholesome, unwholesome, and neutral mental states.

Blessing (Tib. jinlap) When an individual has great devotion, he or she is able to “tap into” or receive the blessings or energy created by the Buddhas and bodhisattvas. The blessings of the lineage are always there, but can only be received if one makes oneself receptive to them so they are not something externally bestowed by more enlightened beings.

Bodhisattva (Tib. chang chup sem pa) An individual who has committed him or herself to the Mahayana path of compassion and the practice of the six paramitas to achieve Buddhahood to free all beings from samsara.

Buddha-nature (Skt. tathagatagarbha, Tib. deshin shekpa nying po) The original nature present in all beings which when realized leads to enlightenment. It is also called Buddha-essence.

Daka (Tib. da po) A male counterpart to a dakini.

Dakini (Tib. kandro) A yogini who has attained high realizations of the fully enlightened mind. She may be a human being who has achieved such attainments or a non-human manifestation of the enlightened mind of a meditational deity.

Dharma (Tib. chö) This has two main meanings: Any truth such as the sky is blue and secondly, as it is used in some texts, the teachings of the Buddha.

Dharma protector (Skt.. dharmapala, Tib. chö kyong) These are spirts and other entities that do not have a body which pledge themselves to protect the dharma and help dharma practitioners.

Dharmadhatu (Tib. chö ying) The all-encompassing space which is unoriginated and beginningless out of which all phenomena arise.

Four Foundation of meditation (Tib.tun mong gi ngon dro shi) These are the four thoughts that turn the mind. They are reflections on precious human birth, impermanence and the inevitability of death, karma and its effects, and the pervasiveness of suffering in samsara.

Generation Stage (Tib. Che rim) In Vajrayana there are two stages of meditation: the creation and the completion stage. In this stage the visualization of the deity is built up and maintained.

Guru yoga The fourth practice of the preliminary practices of ngöndro which emphasizes devotion to one’s guru.

Jnana (Tib. yeshe) Literally “primordial awareness.” This is the wisdom that manifests at enlightenment when the mind is no longer obscured.

Mahayana (Tib. tek pa chen po) Literally, the “great vehicle.” These are the teachings of the second turning of the wheel of dharma which emphasize the emptiness of phenomena and the bodhisattva way.

Mandala (Tib. chil kor) A diagram used in Vajrayana practice which usually consists of a central deity and a palace with four door facing the four directions.

Mantra (Tib. ngak) A series of Sanskrit syllables such as OM MANIO PEDME HUNG which are repeated to arouse the essence of the deity in one’s mind.

Middle way (Tib. u ma) or Madhyamaka School. A philosophical school founded by Nagarjuna and is based on the Prajaparamita sutras of emptiness.

Nirvana (Tib. nya ngen lay day pa) A state of no more suffering achieved when one is completely liberated. Used in contrast to samsara.

Phowa (Tib.) An advanced tantric practice used in this case to eject the consciousness at the time of death to a favorable realm.

Prajna (Tib. sherab) Sanskrit for “perfect knowledge” and can mean wisdom, understanding, or discrimination. Usually it means the wisdom of seeing things from a high (e.g., non-dualistic) point of view.

Rinpoche Literally, “very precious” and is used as a term of respect for a Tibetan (usually reincarnated) guru.

Relative truth (Tib. kunsop) There are two truth: relative and ultimate truth. Relative truth is the perception of an ordinary (unenlightened) person who sees the world with all his or her projections based on the false belief of ego.

Sadhana (Tib. drup top) A ritual text which details how to do a specific tantric practice.

Samadhi (Tib. ting nge dzin) Also called “meditative absorption” or “one-pointed meditation” and is the highest form of meditation in which the mind remains in meditation without any distraction.

Shamatha or tranquility meditation (Tib. she nay) This is basic sitting meditation. The aim of Shamatha meditation is to be able to place the mind on an object and remain there without distraction.

Samsara (Tib. kor wa) Conditioned existence which is ordinary suffering in life which occurs because one still possesses passion, aggression, and ignorance. It is contrasted to nirvana.

Skandha (Tib. pung pa) Literally, “heaps” and are the five basic transformations that perceptions undergo when an object is perceived. These are form, feeling, perception, formation, and consciousness. Also translated as aggregates.

Shunyata (Skt., Tib. tong pa nyi) Translated as “voidness” or “emptiness.” The Buddha taught in the second turning of the wheel of dharma that phenomena have no inherent existence and therefore are “empty.”

Sutrayana (Skt.) for “sutra vehicle.” In can refer to studying and analyzing the teachings of the Buddha rather than doing direct meditation to understand reality.

Tantra (Tib. gyu) The teachings of the Vajrayana.

Tara (Tib. Drolma) A female deity who has great compassion and has pledged to protect others and is known as the “patron saint” of Tibet.

Three immutables These are the Theravada, the Mahayana, and the Vajrayana.

Three Jewels (Tib. kön chok sum) These are the Buddha, the dharma (the teachings of the Buddha), and the sangha (the companions on the path).

Thervada (Skt. Tib. neten depa) The “elder ones” or the school of Buddhism which ahs been maintained in Thailand, the Republic of the Union of Myanmar (Burma), Cambodia, Vietnam, and Sri Lanka.

Three roots (Tib. tsa wa sum) These are the lamas, the yidams, and the dharma protectors.

Tirthikas Religious people who believe in a personal self.

Torma (Tib.) A ritual object made of dried barley and butter and put on the shrine (altar) used as a symbolic offering to the deities.

Vajra (Tib. dorje) This is either an implement used in Vajrayana practice or it denotes something which is indestructible such as in “vajra nature.”

Vajradhara (Tib. Dorje Chang) The name of the dharmakaya Buddha.

Vajrayana (Tib. dorje tek pa) There are trhee major types of Buddhist practices. The Theravada, the Mahayana, and the Vajrayana which emphasizes the clarity aspect of phenomena and is mainly practiced in Tibet.

Vinaya (Tib. dul wa) These are the teaching by the Buddha concerning proper conduct. There are seven main precepts that may be observed by lay persons or 252 and 320 to be observed by monks and nuns respectively.

Wheel of dharma (Skt. dharmachakra) The Buddha’s teachings correspond to three levels: Theravada (Hinayana), the Mahayana, and the Vajrayana with each set being one turning.

Yana (Tib. thek pa) Literally, “vehicle” but can refer to the level of teaching. There are three main yanas (the Theravada, Mahayana, and Vajrayana).