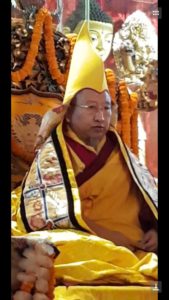 In January 2016, Dagom Geden Kunkyob Ling Buddhist Monastery in Indianapolis, Indiana opened its doors to the public, and as members of the monastery, we are delighted to announce that His Eminence the 13th Kyabje Daknak Rinpoche has accepted our invitation to give teachings and initiations once again in Indianapolis.

As the younger brother of our root Lama, His Eminence Kyabje Dagom Rinpoche, Kyabje Daknak Rinpoche was born in 1961, and upon his ordination, he was given the name Losang Yeshe Thinley Gyaltsen, which means “pillar of goodness, wisdom and precious undertaking.” His Eminence Kyabje Daknak Rinpoche is considered by many to be the Nirmanakaya form of Buddha Amitabha and Dharmapala Setrap and is seen as a Living Buddha at both Sera Mey Monastery and his personal monastery, Zetho Monastery, located in Lhorong, Chamdo Prefecture, Tibet.

Kyabje Daknak Rinpoche first studied at Drepung Monastery and then at Sera Mey Monastery under the tutelage of eminent masters including His Holiness Kyabje Zong Rinpoche, H.E. Dagom Rinpoche and H. E. Zemey Rinpoche. Over the years, Rinpoche has kept faith with all the precepts and teachings of the pure Geden Ear-Whisper lineage and has practiced all the methods, important instructions, satras and principles that have been taught to him.

In 1996, Daknak Rinpoche received the Geshe Lharampa degree, equivalent to a Ph.D. in Tibetan Buddhism, which was awarded after being examined at the three major monasteries of Gaden, Sera and Drepung. During the same year he also entered Gyumey Tantric College to learn and practice Esoteric Buddhism. He is an accomplished master of both the sutra and the tantra. Aside from going on regular retreats, he is a remarkable Buddhist and a true guru in his practices of both Exotoric and Esoteric dharmas. He not only strictly follows the moral teachings of Buddhism in his daily life and improves himself, but he also shows compassion like the Mahasiddhas who are known for their great wisdom. During this period of moral decay and materialism, practicing Dharma is quite difficult, let alone having the opportunity to find a true and qualified Buddhist master. Despite his fame and personal interests, Daknak Dorje Chang continues to benefit countless sentient beings, and uses his resources to build Buddhist temples and to help monastics (i.e., monks and nuns) and poor people around the world. We are fortunate to meet such an accomplished guru.

In 1999, he travelled to Taiwan and devoted himself to propagating Buddhism there, and in 2000, Daknak Rinpoche established The Chinese Gandenpa Buddhist Centre in Tao Yuan, Taipei, Taiwan. Since that time, he has devoted himself to teaching Buddhism in Taiwan, and he has sought to preserve the Geden lineage found by Lama Je Tsongkhapa and spread the Buddha Dharma. In that regard, he travels frequently between Taiwan and Tibet and continues to propagate Buddhism in India, Nepal, Mainland China, Hong Kong, Singapore, Thailand, and Mongolia. His upcoming trips to Canada and to the United States constitute his first visit to North America, and we are fortunate that has agreed to teach at our monastery.

After Kyabje Dagom Rinpoche's passing in 2007, Kyabje Daknak has been especially kind, giving his support to Dagom Ladang and Dagom Geden Dropen Kunyob Ling Monastery in Kathmandu. However, his generosity has also been extended to other monasteries in the region. For example, in early April 2012, Segyu Gaden Phodrang Monastery in Kathmandu invited and hosted a series of teachings and pujas by Kyabje Daknak Rinpoche. During this time, Rinpoche bestowed a White Tara empowerment as well as a brief commentary on the practice. In gratitude the monks of Segyu Monastery performed a long-life puja to assist in creating the causes for Daknak Rinpoche to remain in the world and continue turning the Wheel of Dharma for a very long time.

In October 2012, Daknak Genden Lhundup Ling opened its doors to the public, and that monastery houses a very special bhumpa, or ritual vase, which is an important ceremonial item used during initiations  and other pujas. Like all bhumpas, it has a long spout adorned with a detachable peacock feather. However, the water from this bhumpa is said to remove negativities and chase away evil spirits when sprinkled or poured over any object. Another thing that is close to Rinpoche’s heart is providing medicines for the needy as he believes very much in alleviating the sufferings of beings.

We are honored that he will extend his generosity and kindness to the Indianapolis region and beyond.