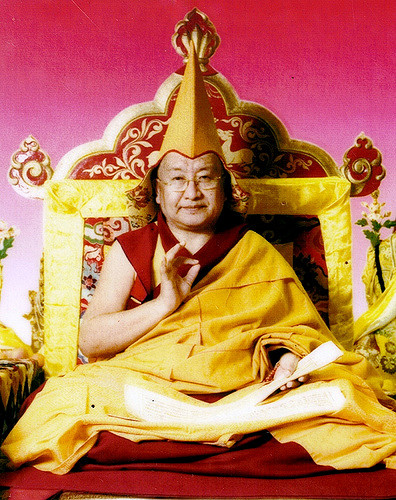 During his life, Kyabje Dagom Rinpoche was known for teaching the Buddha Dharma and providing spiritual advice to thousands of students around the world. Rinpoche was a loving teacher who approached his students with compassion and loving-kindness, and because of this his Dharma centers have flourished. Kyabje Dagom Rinpoche did not care to mix religion and politics, so he put forth a great effort to ensure the happiness and peace of everyone in every country where he traveled. Throughout his life, Rinpoche blessed countless beings with the Buddha Dharma and lived his life according to the true teachings of Buddha.

In 1983 Dagom Rinpoche completed his studies and received the degree of Geshe Lharampa, the highest degree in the Tibetan monastic system. Rinpoche continued to receive teachings, empowerments and oral transmissions from great masters, such as H.H.Kyabje Trijang Dorje Chang, H.H.Ling Dorje Chang, and Kyabje Gyara Dorje Chang, among others.

In 1987, Rinpoche passed the tantric examinations and served as the Headmaster of Gyume Tantric College in Hunsur, India. After the completion of his studies, he gave Sutra and Tantra transmissions to students worldwide. Beginning in 1992, Dagom Rinpoche began to establish Dharma centers in Asia and the United States, incuding Dagom Gaden Tensung Ling in Bloomington, Indiana and Dagom Choeling Dharma Center in Minneapolis, USA.

In 2007, the 12th Dagom Rinpoche performed the deed of Parinirvana, the release of the enlightened being from the cycle of rebirth. Fortunately, the enthronement ceremony of the 13th Dagom Rinpoche took place on November 21, 2016 in Chamdo, Tibet at Shodo Monastery, the monastery to which the Dagom Rinpoche lineage of incarnations belongs. In this reincarnation, he has the name Lobsang Khyenrab Tenpai Wangchuk, having been recognized by Zonglo Chocktrul Rinpoche Jampa Khedrup, the second highest lama of Jampa Ling Monastery in Chamdo. Rinpoche will be educated in Jampa Ling Monastery in Chamdo, which is home to more than 1,300 monks.

Venerable Lobzang Dorje began his dharma studies in January 1999, and took Refuge under the guidance of Kyabje Dagom Rinpoche in the May. In 2002, he received getsul vows (novice) in Kathmandu, Nepal and gelong vows (full ordination) in Switzerland from Kyabje Dagom Rinpoche in 2005. While he has studied with and has received numerous empowerments from many Gelupa teachers, he also had the opportunity to study at Rangjung Yeshe Institute, Centre of Buddhist Studies in Kathmandu, where he studied Tibetan and Buddhist Philosophy.

As the founder of Dagom Geden Kunkyob Ling, Ven. Lobzang Dorje fulfills a dream to provide a space where the Buddha’s teaching will be made available to an urban audience, particular to minority members and to members of other underrepresented communities. He also dreams of establishing a community support center that embraces and employs the ideals of socially engaged Buddhism, concerned with racial and gender equality, as well as issues of poverty, crime, and justice.

Ven. Lobzang Dorje holds graduate degrees from the University of Cincinnati, University of Chicago, and the University of Wisconsin-Milwaukee; much of his adult life has been spent teaching, spending 33 years as a university professor. He retired from Indiana University, Bloomington as a professor emeritus. As a faculty member in the Department of Criminal Justice, one of his primary research interests was the integration of geographical and criminological theories to explain patterns of crime in urban areas.

Before moving to Indiana to join the IU faculty, he had completed a large-scale, four-year project that was funded by the National Institute on Drug Abuse (NIDA) on the criminal behavior of adult opiate and cocaine users. At IU he taught courses on race and crime, urban crime patterns, drug use and criminal behavior, theories of crime and deviance, and quantitative methods. Ven. Lobzang has published two books, Honey, Honey, Miss Thang: Being Black, Gay, and on the Streets and Workin’ It: Women Living Through Drugs and Crime, and is working on a third combining his knowledge of the Dharma with his expertise in criminal justice.