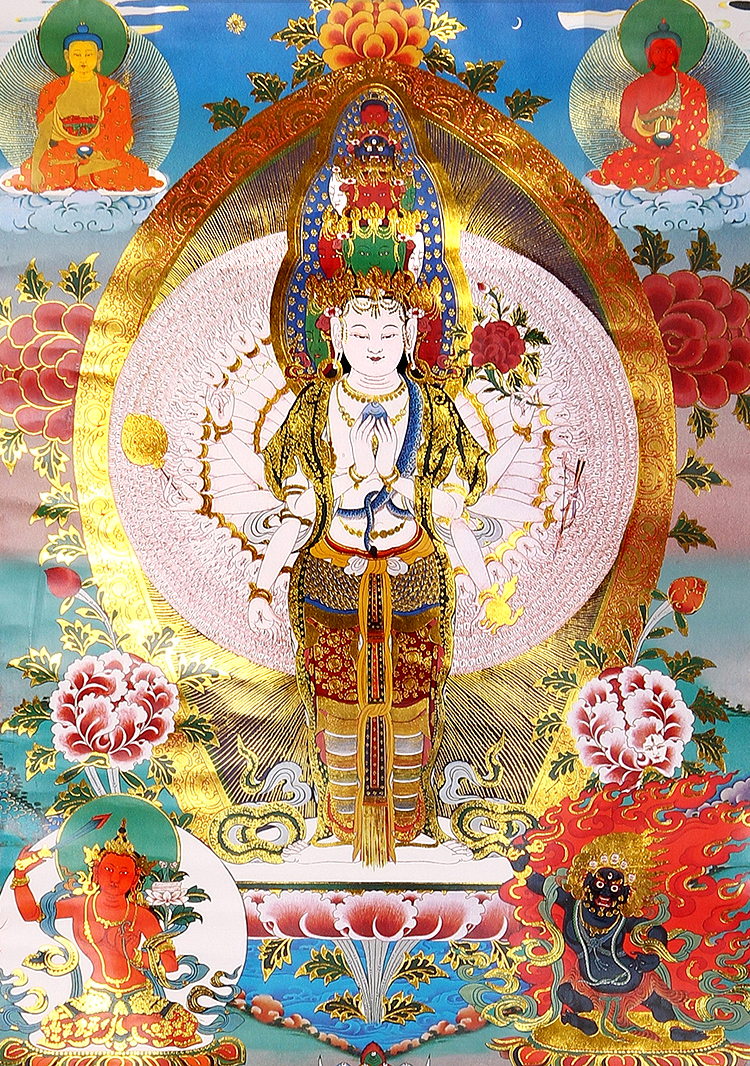 The name Avalokiteśvara means “Lord who gazes down at the world,” and the name’s original meaning fits the Buddhist understanding of a bodhisattva. In Sanskrit, Avalokiteśvara refers to Padmapāni (“Holder of the Lotus”) or Lokeśvara (“Lord of the World”). In Tibetan, Avalokiteśvara is Chenrézik, (Tibetan: སྤྱན་རས་གཟིགས་) and is said to emanate as the Dalai Lama, the Karmapa and other high lamas. In Tibetan Buddhism, Avalokiteśvara is an important deity and is regarded as a Buddha in the Vajrayana teachings. Tãrã came into existence from a single tear shed by Avalokiteśvara. When the tear fell to the ground, it created a lake, and a lotus opening in the lake, revealed Tara. In another version of this story, Tara emerges from the heart of Avalokiteśvara. In either version, it is Avalokiteśvara’s outpouring of compassion which manifests Tãrã as a being.

Avalokiteśvara has an extraordinarily large number of manifestations and some of the more commonly mentioned forms are the Thousand-Armed, Thousand-Eyed Avalokitesvara, the Wish Fulfilling Avalokitesvara or 4-Armed, and Hayagrīva/wrathful form; simultaneously a bodhisattva and a Wisdom King. One prominent Buddhist story tells that Avalokiteśvara vowed never to rest until he had freed all sentient beings from Saṃsāra. Despite his strenuous effort, he realizes that many beings had not been saved. After struggling to comprehend the needs of so many, his head splits into eleven pieces. Amitābha, seeing his plight, gave him eleven heads with which to hear the cries of the suffering. Upon hearing these cries and comprehending them, Avalokiteśvara tried to reach out to all those who needed aid but his two arms shattered into pieces. Once more, Amitābha came to his aid and invested him with a thousand arms with which to aid the suffering multitudes.

Please indicate your intention to attend by emailing us at: daknakteachings@gmail.com or calling 317-283-6781 or by using the registration form on our website ( (www.dgklbuddhistmonastery.org) under the program tab. As always, events at Dagom Geden Kunkyob Ling are free of charge; however, any contributions to support our mission and efforts to preserve and disseminate the Holy Dharma are sincerely appreciated. Your support, regardless of its size, enables us to continue to preserve and protect the Holy Dharma for countless years to come.